You are in the right place for the premier Adobe AEM Forms training. Our trainers are Adobe Certified Instructors (ACIs) and Adobe Certified Experts (ACEs) in AEM Forms. You will learn AEM Forms from certified instructors and experienced developers. Each course is professionally documented in one of our industry-leading student manuals. Our training manuals have been used successfully by over 15,000 students over the past 10 years. Each AEM Forms Training volume is superbly illustrated and designed for hands-on learning. 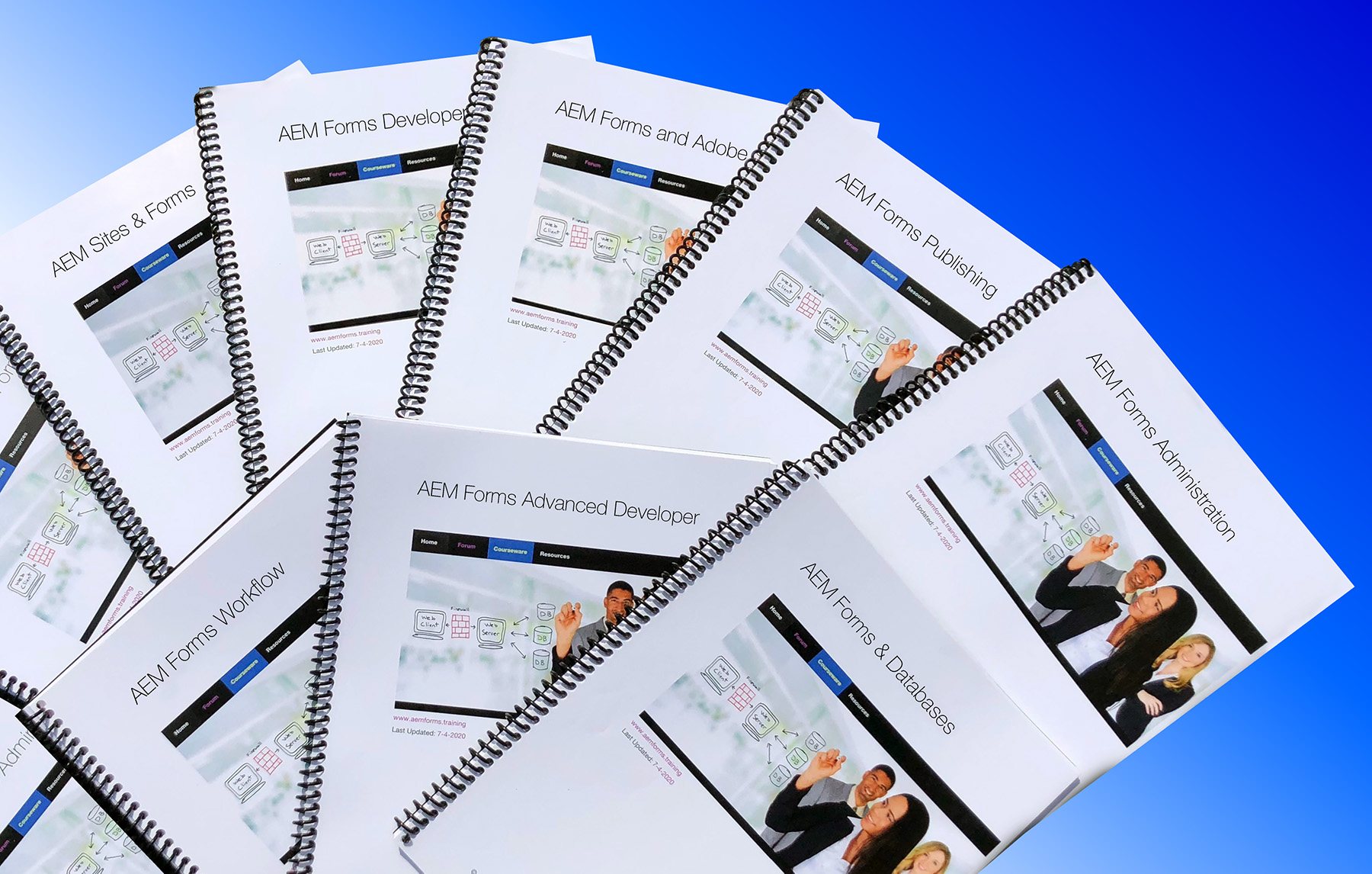 AEM Forms is a comprehensive and top-of-the-line enterprise form solution. It contains leading-edge tools and meets the needs of the entire enterprise forms workflow. It contains technology that enables your users to Find and Fill your forms as well as capabilities for you to Process and Respond to their submissions. You can even Measure all aspects of your form system to further optimize the form filling experience and improve your results.

The problem with AEM Forms is not that is offers a narrow set of tools, the problem is that it offers a broad set of tools and technology. It can seem overwhelming at first. Although this is a problem you can handle, you need to first put all of these tools and technologies into proper context and learn which are right for you. Consider the extensive range of these use cases.

Some of these use cases are of primary importance to you now. Others are likely secondary goals that you have for your organization. Understanding the tools and technology is your key to developing a smart strategy for AEM Forms.

As seen in Diagram 1, AEM Forms is actually two different products that are based on two different legacy technologies. They are commonly used for two different purposes. Both products inherit from Adobe’s legacy LiveCycle and Communicade (commonly called CQ) products. 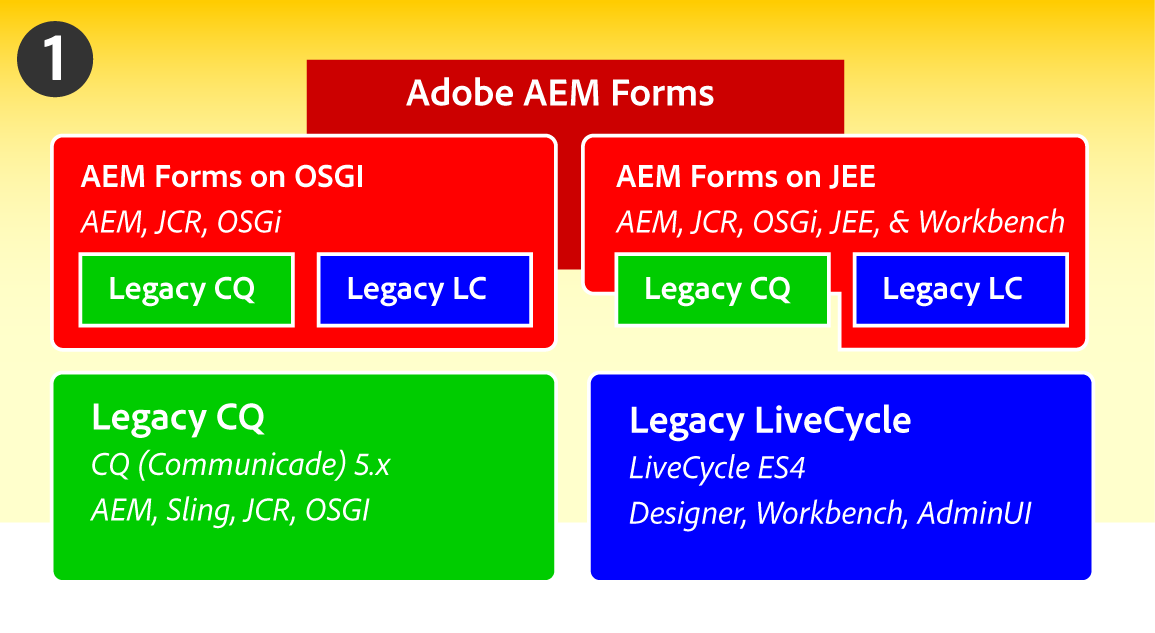 As seen in Diagram 2, AEM Forms on OSGi is built on an OSGi foundation and only requires a JVM (Java Virtual Machine) to run. OSGi stands for the Open Service Gateway Initiative which is a Java framework for developing and deploying modular software programs.

A form developer uses the AEM TouchUI to develop adaptive and responsive forms. AEM Forms Designer (the legacy LiveCycle Designer) is also used to create XDPs (XML Data Packets) for this platform. These XDPs serve as DoRs (Documents of Record) and Form Models for the adaptive and responsive forms. A System Administrator for this platform needs to master the Web Console, CRXDE, Apache Sling, and the AEM Administration tools. 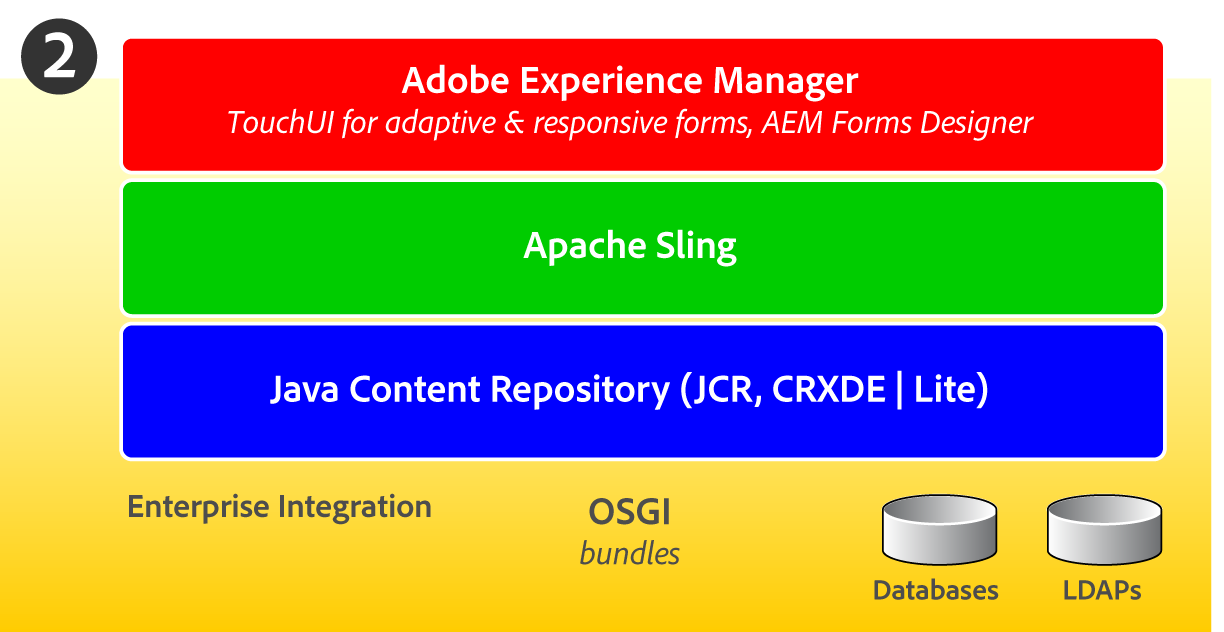 The JEE architecture (Diagram 3) is built on the AEM Forms Foundation, the common run-time environment for all services. In addition to the services that Adobe provides, you can also build your own services in AEM Forms Workbench or in Java. Besides Workbench, you also use AEM Forms Designer, AdminUI, and CRXDE when working with this technology stack. Although Adobe does not use the LiveCycle brand anymore, you will still see the name LiveCycle used throughout the AEM Forms on JEE product. 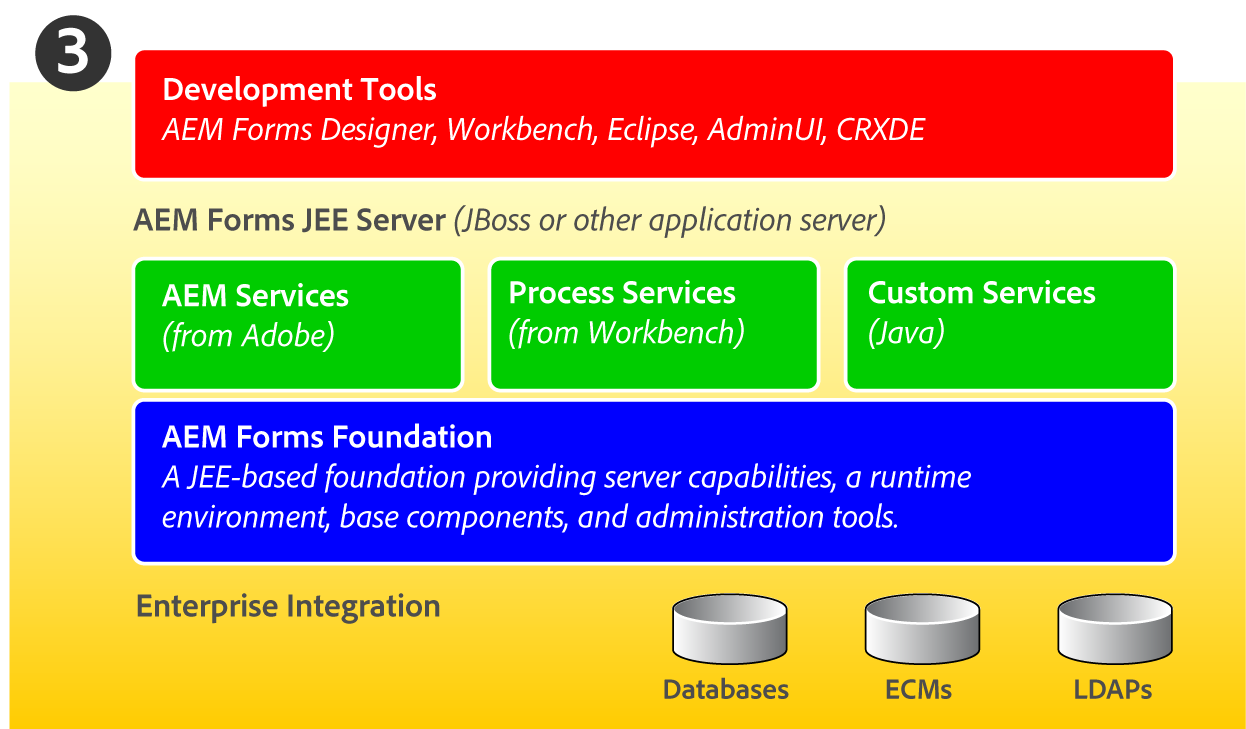 As mentioned previously, AEM Forms on JEE has a composite architecture. The forms and form-related assets you create in AEM Forms Workbench are replicated over to the OSGi JCR so you can access them in the AEM TouchUI. The replication works both ways.

So, as you can see, AEM Forms does not contain too little technology. You will not be limited or confined. In fact, you have the opposite challenge. You need to figure out the right platform and the right AEM Forms technology to meet your goals. Then, you need to master the tools. That’s where we come in. Contact Us to learn more about AEM Forms and our AEM Forms Training.

Contact Us to learn more about our AEM Forms Training